This beautiful book contains the early history of Pike County and biographies of some of the men who shaped it. Learn about the court cases here in the county that Abraham Lincoln was involved with. Walk the streets with Lincoln and learn about the folks that he considered friends or political associates.

The book covers and honors the brave Pike County men that answered Lincoln’s call for troops in the American Civil War. Within this volume you will find regimental histories, soldiers’ photos, and biographical sketches like brothers Charles F. and George P. Bechdoldt. Charles enlisted in Co. E, 28th Illinois Infantry and was killed July 1863 at Jackson, MS. His brother, George, enlisted in Co. K, 2nd Illinois Cavalry and was severely wounded at the battle of Holly Springs, MS, but survived his wound, returning home to Pike and becoming a very wealthy and successful farmer.

Did you know that the Medal of Honor has its roots in the Civil War and that two soldiers that were awarded the medal for deeds of valor during the war had Pike County connections? This book tells their brave stories and the thirty year journey leading up to being awarded America’s highest military honor.

Within this beautiful book the reader will find a complete muster roll of all known Pike County men, recording where and what unit they enlisted. The final chapter in the book, The Honor Roll, is the largest and contains all the Civil War soldiers that are buried in Pike County, listed by cemetery. The Honor Roll contains their name, company, regiment, and date of death, followed by a brief history of their military service.

This book is available to read at the library or can be purchased for your personal library from Casteel’s Color Wheel in Pittsfield or you can email the Abe Lincoln Project at alplflpc@gmail.com. 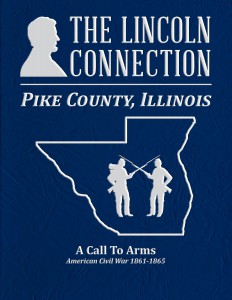